Planting for a shady rockery

This rockery border was just part of a much bigger, long-term project to restore and refresh the planting in this larger-than-average town garden in north London. The beds were populated with specimen shrubs which had largely been left to their own devices: some had thrived and threatened to dominate, others had struggled in unsuitable conditions. We worked on pruning, thinning, removing, transplanting and underplanting the larger shrubs while also planning a scheme for this rockery.
The rockery, unusually, was completely bare of any planting whatsoever. Although laid out as a rockery, it faces east and is predominantly shady. Paradoxically the north end is the brighter side, as trees and fencing overshadow it on the southern edge. So the conventional sun-loving alpine plants had to be set aside in favour of leafier shade lovers.
The focal point within the bed was originally to be a single conifer, either a Juniperus scopulorum ‘Skyrocket’ or J. communis ‘Hibernica’, or ideally something slower growing. Buddha at the time was sitting rather lonely under a tree nearby and the client suggested moving him to the centre of the new rockery with his two conifer sentinels. He looked at home straightaway, and I swear his face has developed a smile since his move. Flanked by the two small conifers he has the Japanese anemones as a backdrop. Tellima grandiflora provides background vegetation in spring and summer.
The colour palette of mostly pinks and purples is designed to be visible from the kitchen window opposite at the far end of the garden. In late summer, the Hylotelephiums form pink cloudy cushions for Buddha, and Verbena bonariensis provides spot colour until the first frosts. their seed heads adding structure to the evergreen leaves over winter. In spring the bed comes alive with bulbs: crocus, dwarf daffodils, chionodoxa, and snowdrops, and then tulips and yellow and gold primulas.
We had another serendipitous discovery while preparing the bed for planting. I cut back the ivy covering the fence behind quite dramatically and found a few straggly and tattered wisteria stems underneath. By clearing a space around them and giving the wisteria more light it woke up with a start, and now produces its long racemes of blue flowers every spring for a dramatic backdrop to the bed.

For more on the shady rockery and its planting, see http://www.gourmetgardening.co.uk/2017/10/shady-rockery.html 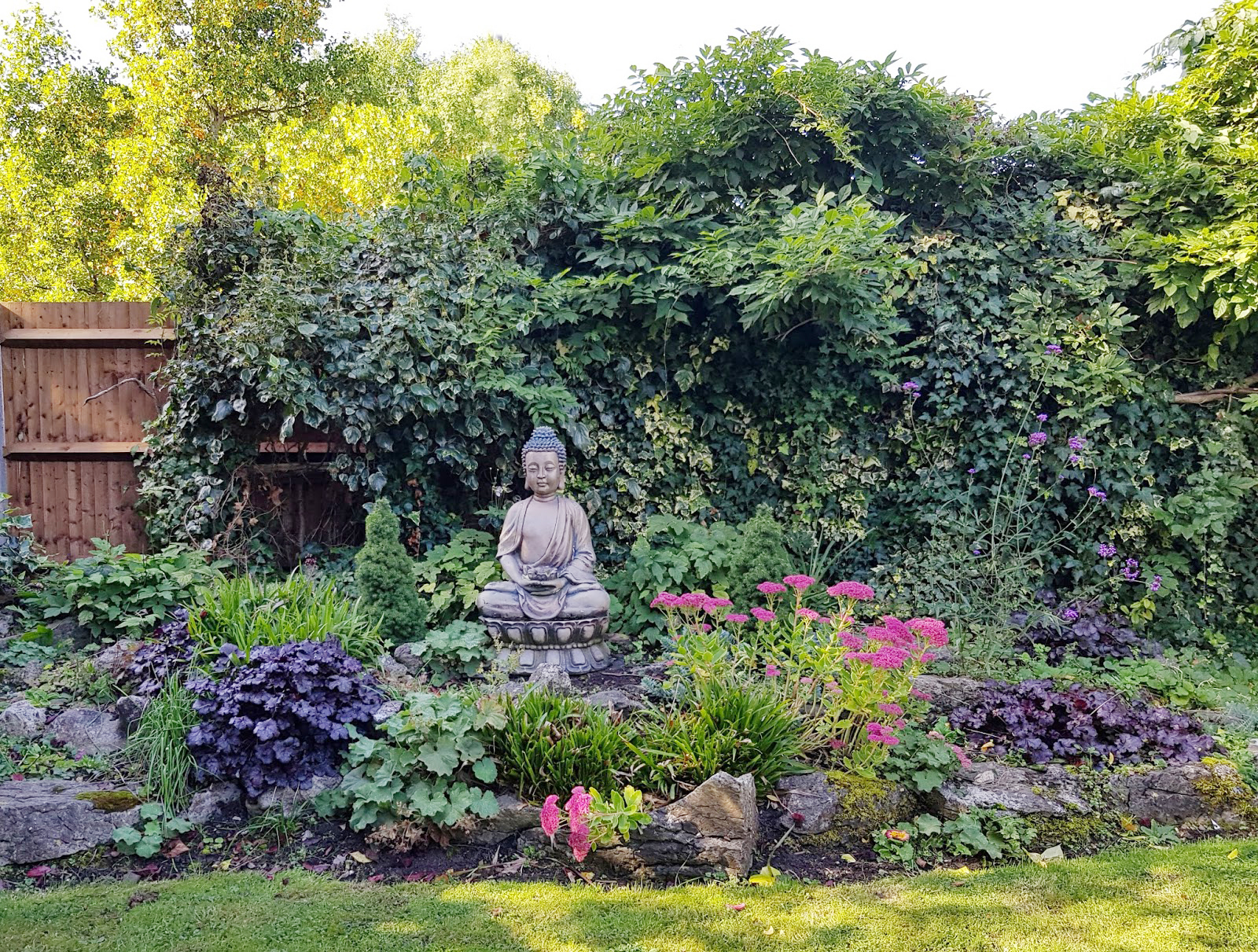