When we first saw this small and rather hemmed-in courtyard in north London, it was immediately apparent that the space would be best served by using just a few well-chosen materials. The client was overseeing major interior decoration as well and wanted the style of the new garden to flow effortlessly from the house.

The client wanted a garden to sit and relax in but also for socialising. Plenty of seating space despite the size was a priority. A small recessed area to the right of the courtyard will be used to house a barbecue and outdoor kitchen units.

The client also wanted to be able to grow herbs for the kitchen, and we installed the green wall, using vertical garden pods from Green4Air, with a solar-powered irrigation system supplied by Irrigatia. The pods contain culinary herbs and salad leaves, with a number of plants with edible flowers coming through for summer.

The patterned tiles were chosen from the Sorrento range supplied by Fired Earth. The intricate detailing might have been overwhelming in a larger patio but in this compact space they brought light and texture.

The cedar bench was designed by The Urban Hedgerow and built from scratch onsite by Graham Thompson of Creative Landscapes London, creating enough room to seat 8-10 people comfortably – or for fewer people to stretch out on cushions. The fence to the right was also built on site using materials from
Jacksons Fencing and the corten steel screen, covering an unsightly gap in the rear wall was supplied by Stark & Greensmith.

The handsome bamboo plant was already in the raised bed to the rear, which was given new edging and coping to match the cedar bench, and the soil reconditioned. The bamboo was thinned and trimmed to let in the light and give it a boost, then underplanted with Choisya ternata ‘Aztec Gold’, an evergreen shrub with fine dissected leaves to throw interesting shadows against the fence and screen, and with long-lasting white flowers in spring and summer.

The deep blue colour for the fences to each side was chosen to match the newly painted interiors in the house. Exterior wood paint from Little Greene. 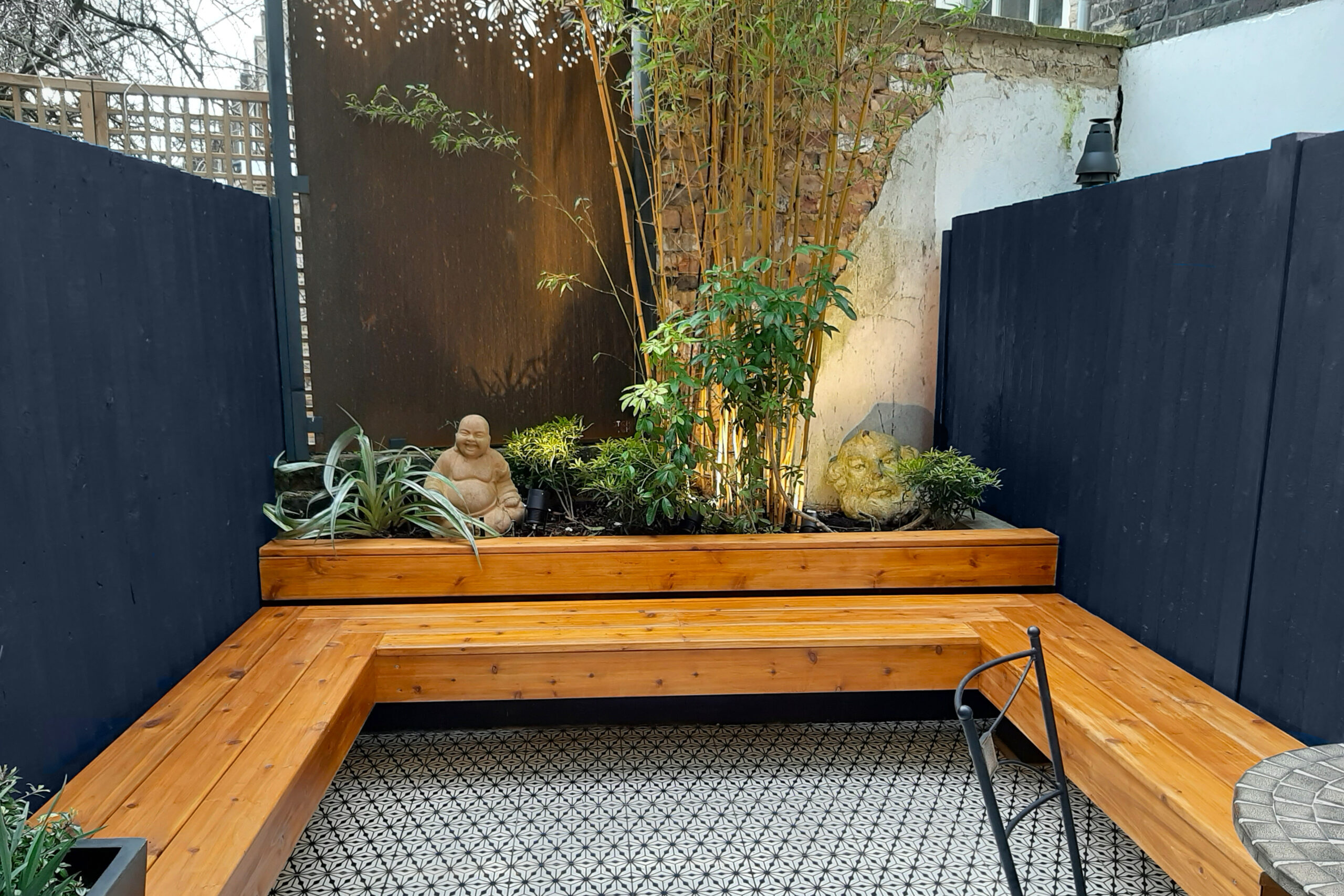 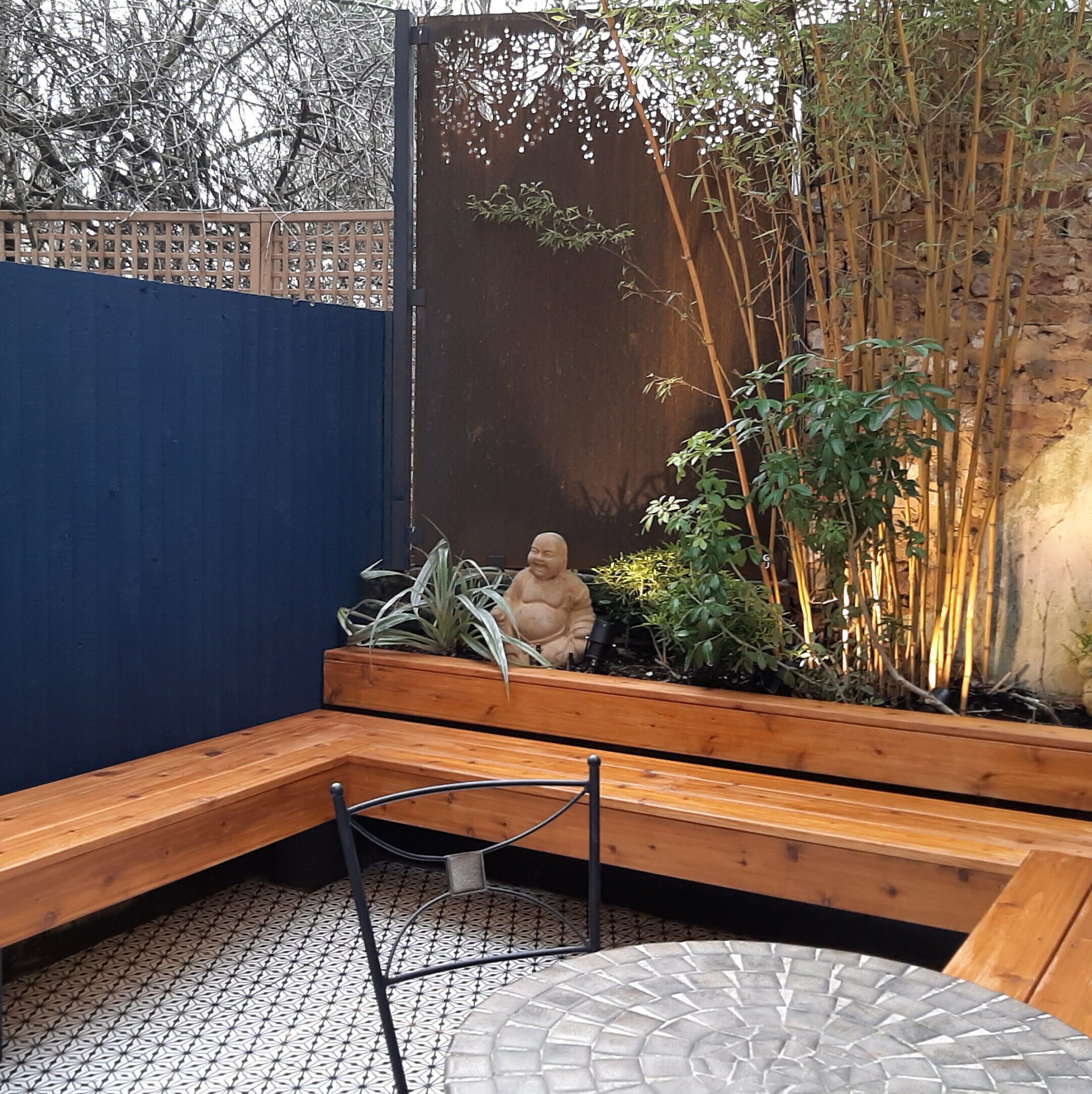 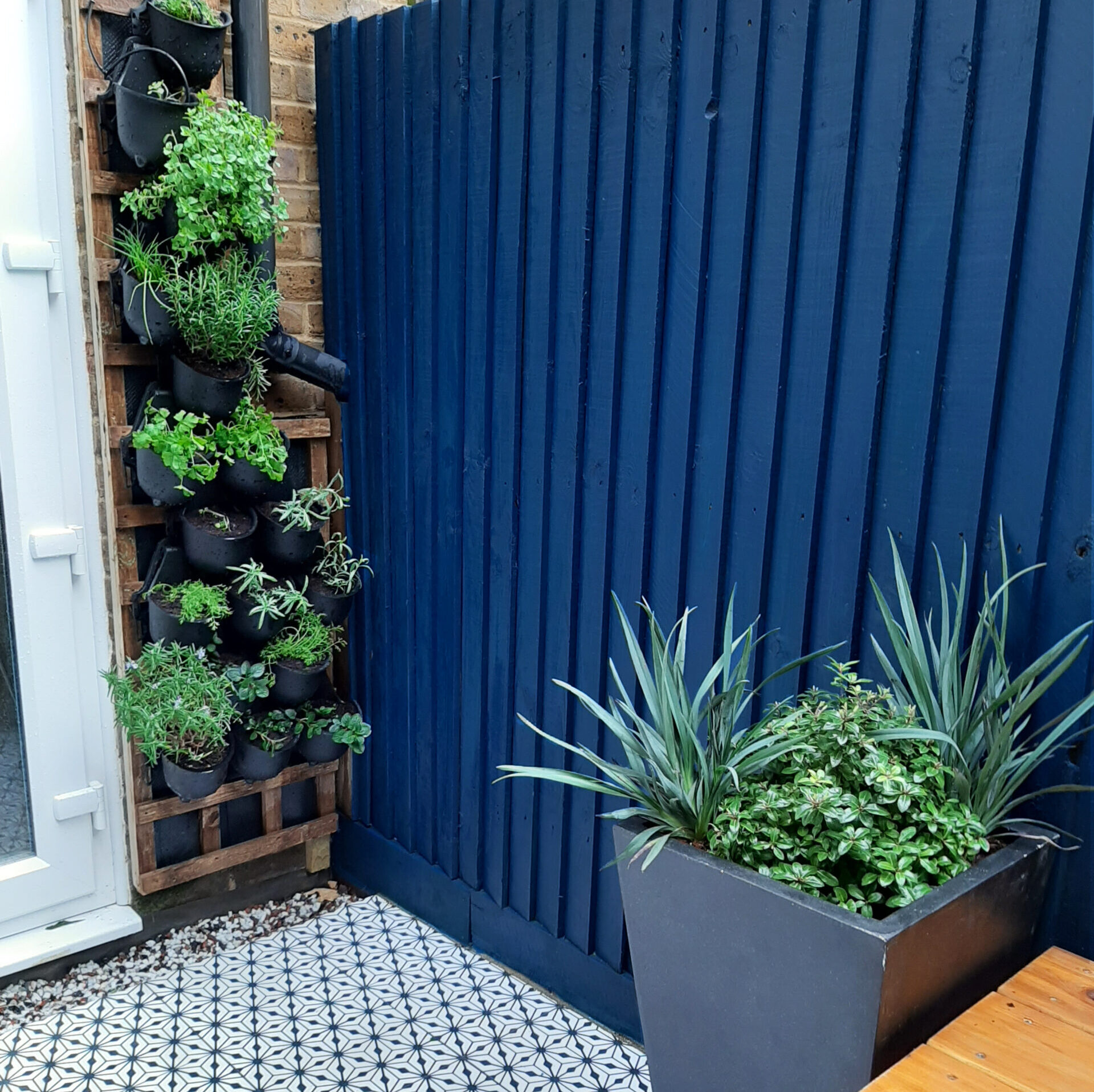 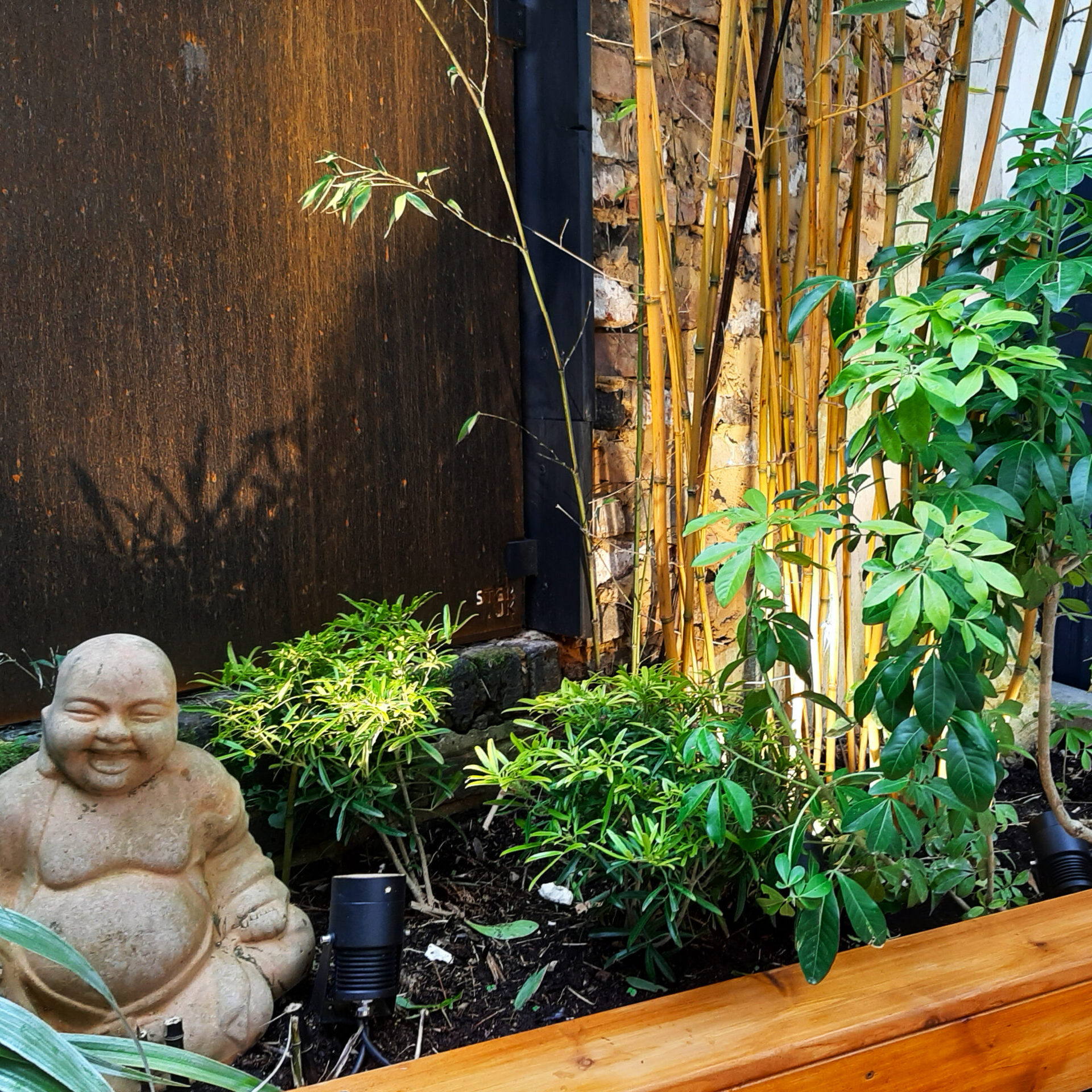 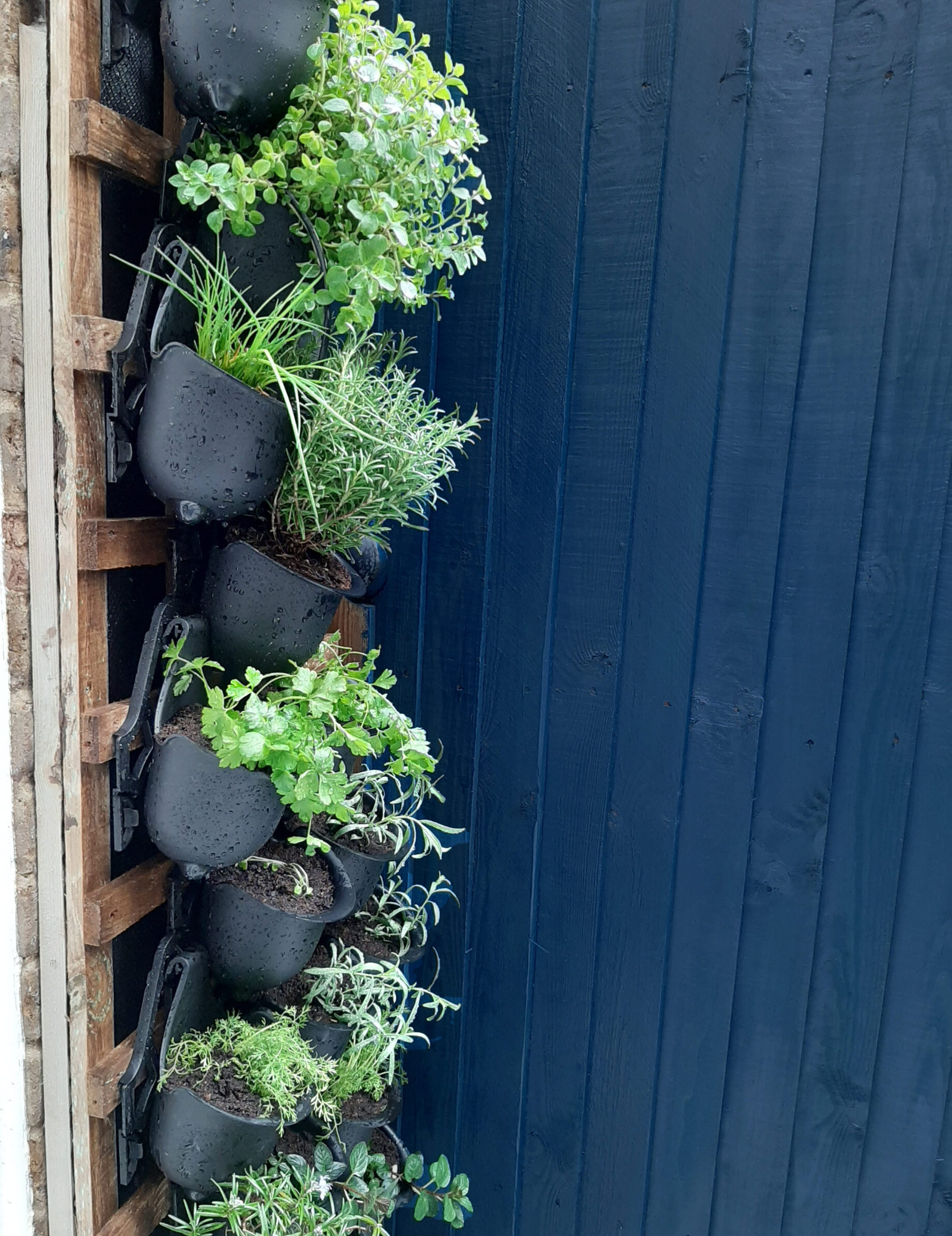